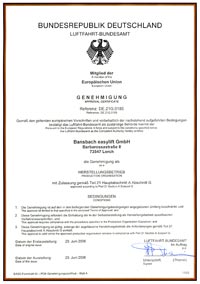 The world-wide company, with over 45 years of experience in the production of gas springs, has always stood for quality. At the same time, every gas spring variant made from components is produced individually for its customers. The easylift system allows the assembly of a gas spring similar to the well-known "Lego modular principle". Advantage: countless variants of existing components, customized according to customer requirements, within shortest manufacturing times and with high quality!
This quality standard was once again underlined by the approval as a manufacturing company according to Part 21G by the Aviation federation. As the first gas spring manufacturer in the world, Bansbach easylift, particularly in the aviation sector, is an enormous competitive advantage.

The workforce at Bansbach easylift under the direction of Gerhard Schopf worked on the successful approval. It is a great success and the expression of the high quality standards, which covers all areas of the gas spring manufacturer. It is particularly pleasing to note that the Bansbach gas springs with a production depth of more than 90% are manufactured completely in Lorch. "In the long term, the aerospace industry is to become an even more important part of our company and approval as a manufacturing company is a milestone", says Edgar Hahn-Bansbach, Managing Director and owner of Bansbach easylift.

Commitment to the production location in Germany

Over 200 employees are employed by the family-owned company (plus more than 70 at the sister company Drohmann easycut). And so it is also very clear at Bansbach easylift. So the ultimate goal of the company is the long-term security and the creation of new jobs. Social responsibility for the company and its families is a key factor for the company. No one thinks of a shift in production to 'low-wage countries'. On the contrary, the number of employees at the production site in Lorch, which is exclusively manufactured, has steadily increased in recent years. The production capacities are also steadily increased with increasing sales. It is therefore a corporate objective that is lived and shows that one can also keep pace with the global world as a medium-sized, family-run company. As an approved manufacturing company for the aerospace industry, a further competitive advantage is gained which underpins the company's philosophy of providing its employees with a long-term safe job.